The prevalence and use of wireless telephones (also known as cellular telephones, cell phones, or mobile phones) has changed substantially over the past decade. Today, an ever-increasing number of adults have chosen to use wireless telephones rather than landline telephones to make and receive all phone calls. 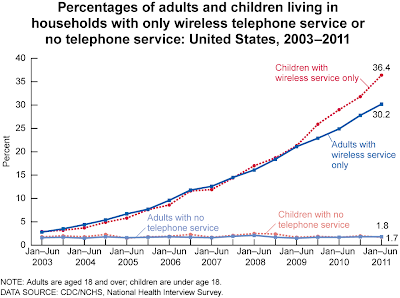 The increasing prevalence of wireless-only households has implications for telephone surveys, as well as landline-based political activities like Get Out The Vote (GOTV) phone banking and various other political phone canvassing activities.

While it many be difficult to impossible for political organizations to use cellphone numbers to call voters, most wireless only adults are accessing the Internet on their smart phones to communicate with friends on FaceBook, Twitter and other social hubs.

To communicate with voters in the 21st century political candidates and organizations must use multiple Internet communication channels. The demographic characteristics of cellphone only adults are highly correlated to the largest blocks of 2006, 2008 and 2010 progressive voters.

The CDC survey covering the January-June 2011 period finds that there are three demographic groups in which the majority live in households with only wireless telephones:

Fewer and fewer land line phones in the home, particularly among younger progressives, means it will be increasingly difficult to connect with voters through the classic "live call" campaign phone banking operation, unless people voluntarily provide their cell numbers. Even when cell numbers are available prerecorded automated robo calls to cellular phones in the U.S. are, with very few exceptions, a violation of federal law and FCC regulations. Please see 47 U.S.C. 227(b) and 47 C.F.R. 64.1200(a) for the specifics.

Most political campaigns are careful not to robo call cell phones because the law allows a minimum fine of $500 for each violation. U.S. Rep. Lamar Smith, R-San Antonio, TX, paid for robo calls throughout Central Texas during the fall of 2009 when he hired a company to make about 210,000 calls to constituents' wireless phones with a survey on health care reform and other issues. Fortunately for Smith no charges were file, but according to the Federal Communications Commission, robocalls to mobile devices can bring a fine of up to a maximum of $11,000 per call.

The chart below depicts actual survey results through the end of 2009 and projected cellphone-only rates through 2012. 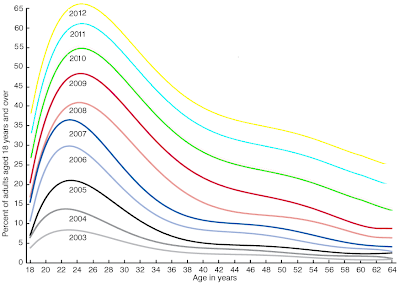 Wireless only adoption varies not only by age and ethnic groups, but also by region and urban verses rural areas. By June of 2010 Texas had the third highest rate (32.5%) in the nation of households ditching their landline phones in favor of a mobile-only lifestyle. Texas also leads in the adoption of smart phones and mobile Internet access. In some metro areas of Texas, such as Dallas County, up to 62% of households can be reached only by calling a mobile phone.

The US Center for Disease Control (CDC) released its latest state by state "Wireless Substitution" report in April 2011. That report shows that as of June, 2010 26.6% of US households were wireless only, meaning there was no landline in the house. In some states the numbers were higher than the average and some lower. 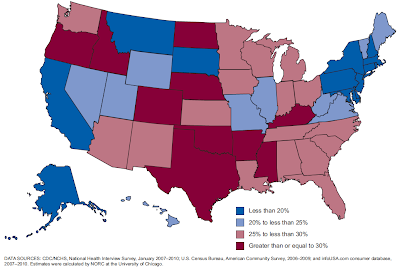 Rhode Island and New Jersey had the lowest rates of wireless substitution households at 12.8 percent, while Arkansas had the highest at 35.2 percent and Texas had the third highest household rate at 32.5 percent. The data suggest that economics are the primary driver of the decision to abandon the landline - lower income areas are going cell-only faster than more affluent areas.

CDC wireless surveys are also finding increasing percentages of so-called "cellphone-mostly" households. Cellphone-mostly households are households that do have a land line, but that line is used for FAX, security systems or other and it is rarely or never used to receive incoming calls. The January-June 2010 CDC survey found that 16% of households nationwide that do have a landline receive all or nearly all of their calls on a cellphone. This means that in order to reach 43 per cent of U.S. households as of June 2010, the only practical way to call their cellphone. If this additional statistic is added the number of cell-only households jumps dramatically in some states.

As of December 2010, nearly a third (31%) of all mobile consumers in the United States owned smartphones, which are cellphones with app-based, web-enabled operating systems.

A global study by research firm Gartner Inc. suggests that by as soon as 2013, mobile smartphone devices will overtake personal computers, including laptops, as the most common way people access the Internet.

But nowhere in the U.S. is the shift from desktop and laptop computers to smartphones making as much of an impact as in Latino, African American and low-income households. In these households the cell phone is often both the only household telephone, and increasingly, the only device used to access the Internet. Again, Texas leads in the adoption of smart phones and broadband Internet access by those smart phone devices. [see Austin American Statesman news article - Increasingly, Latino and African-American teens are using cell phones as their main device to get online.]

Smartphone total market penetration is highest among mobile users who are part of ethnic and racial minorities in the U.S. – namely Asian/Pacific Islanders (45%), Hispanics (45%) and African-Americans (33%), populations that also tend to skew younger. Meanwhile, only 27 percent of White adult mobile users reported owning a smartphone.

With Internet access increasingly within hand's reach 24x7 through their smartphone is it any wonder all young adults and ethnic and racial minorities are in near constant contact with FaceBook friends and receive most of their news on the Internet? (see Pew December 2010 report - "Internet Generations 2010.")

Cisco's 2011 Global Mobile Data Traffic Report, a comprehensive analysis of the growth in mobile data over the past year and a look ahead for future development in the wireless space, found:

For the third year in a row global mobile data traffic nearly tripled, growing 159% over the course of the year, thanks to Smartphone adoption growth. New data from research firm In Stat forecasts that more than half of all mobile handsets shipped in the U.S. will be smartphones by the end of 2011.

The findings have major implications for Democratic candidates and political organizations who have relied on phone canvassing to qualify voters and then Get Out The Vote through phone banking operations. Traditionally, Get Out The Vote programs use land line phone numbers to contact and motivate voters:

The classic GOTV phone bank event depends on a set of assumptions: You're at home; you have a [home land line] phone; your phone has a hard-coded area code and exchange which means the GOTV caller knows where you are; ... you're waiting for your phone to ring; when it rings you'll answer it; it's OK to interrupt you; you're happy to talk about a political party or candidate;

The increasingly mobile smartphone world is different: In fact, you don't have a home phone; your number can ring anywhere in the world -- probably when your driving the car; you're not waiting for your phone to ring; nobody calls you on your home land line phone anyway (even if you have one) -- they text or tweet to your cellphone; when your cellphone rings you don't answer it if its an unknown number, you resent calls from strangers - you're the do-not-call list. A GOTV caller is just another telemarketer to be ignored, and a 20 minutes GOTV call [the length of many GOTV calls] interrupts using your smartphone to thumb-type messages to your friends on FaceBook, to read your online newspaper or to watch the video your friend just posted on YouTube.

The most progressive segments of the electorate will continue have the highest cellphone only and broadband enabled smartphone adoption rate. Can Internet and Social Media strategies be use in place of classic phone banking operation to contact and motivate voters? The answer is definitely yes, but it's requires new organizing and messaging strategies. It requires strategies that invite voters to join a candidate's or organization's online social network and then that expands that connection to become part of each voter's social networks. Those new organizing strategies include convincing people to provide their cell phone numbers and the permission to call and send text messages and asking for email addresses. 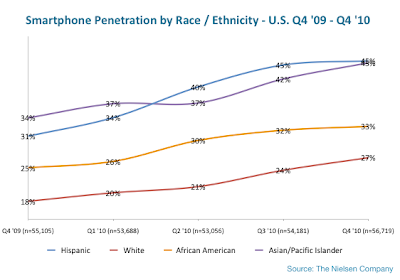 Although only 42 percent of Whites who purchased a mobile phone in the past six months chose a smartphone over a feature phone, 60 percent of Asians/Pacific Islanders, 56 percent of Hispanics, and 44 of African Americans who recently bought cellphones chose smartphones. 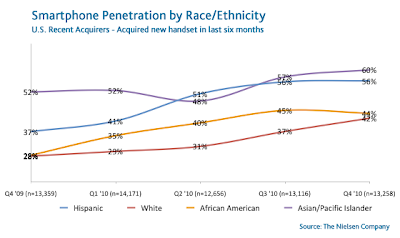 The competition between smartphone operating systems is a heated one. When it comes to the installed base, that is, U.S. mobile consumers who already own smartphones, it is a three-way tie between Blackberry RIM, the smartphone pioneer, Apple’s IOS, which revolutionized the smartphone and popularized mobile apps, and Android OS, the operating system created by Google which has been taking the market by storm. 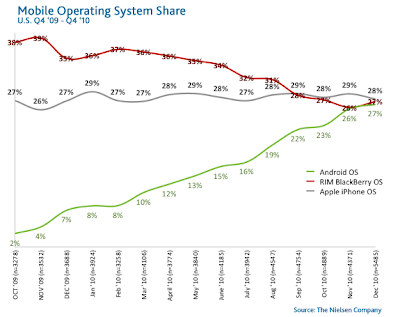 Analyzing the preferences of those who purchased a smartphone in the past six months paints a different picture, however, one in which Android is clearly in the lead with 43 percent of recent acquirers purchasing an Android device, compared to 26 percent for Apple iOS and 20 percent for Blackberry RIM. 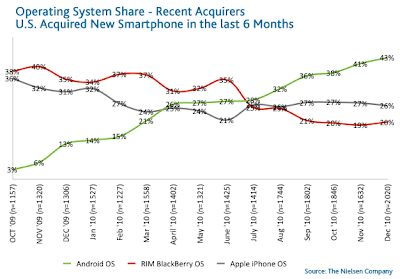 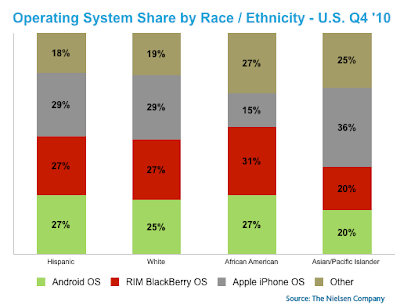 Households without landlines Percentage of U.S. adults and children living in homes that use cell phones as their primary home phone, July 2009-June 2010. (The US Center for Disease Control (CDC) state by state "Wireless Substitution" report released in April 2011)