"The Democratization of Online Social Networks," "Adults on Social Network Sites, 2005-2009," and "The Internet and Civic Engagement."

Video from the book, "Socialnomics: How social media transforms the way we live and do business," written by Erik Qualman and published by John Wiley & Sons, Inc. [Amazon] 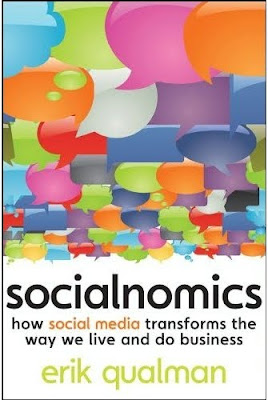 Through extensive research, Erik Qualman shares statistics explaining just how prevalent social media has become in our business and personal lives: SOCIALNOMICS proves that social media is NOT a fad, rather it is a fundamental shift in the way we communicate.

Five Reasons Why Many Political Strategists Do Not Yet Get Social Media?

Over the last 15 years the Internet has spawned wave after wave of disruptive innovation. Those waves of innovation continue to change how we buy things, how we get our news, how we find and connect with friends and how we communicate with each other.

A few state and local candidates around the U.S. as they gear up for 2010 understand that the Internet offers new ways to communicate their campaign message and to connect directly with the voters.
They also see that the Internet provides an important set of tools that can both support and drive supporters to carry out traditional campaign activities. Traditional activities like phone banking, distributing yard signs, communicating with old media reporters, event planning, event advertising, targeting e-mail, targeting direct mail and especially old fashioned “feet on the street” block walking. That’s the good news.

The bad news is that many political strategists and candidates do not yet understand that new media tools can be used effective to both support and drive every campaign activity.

Those candidates who do “get it” and who are making the commitment to build new media “best practices” into their overall campaign strategy from the start, will gain a huge competitive advantage over their opponents -- even incumbents who have deep pocket contributors and who have big campaign war chests of money.

So, why are political candidates and their strategy advisers still dismissing a winning campaign strategy? Here are five possible reasons.

1. This is still relatively new.

There is clearly a learning curve. Social media can be counter-intuitive at times for people that have an old media mindset. If you haven’t studied or grown up in a new world of social media, your traditional mind set will set up barriers to discovery and understanding.

Most candidates consult with “experts” who have run successful campaigns before. This makes sense–go with what has worked in the past. Unfortunately, seasoned political consultant may not understand even email best practices, let alone plan and implement a new "online" media strategy. This is not a knock on veteran campaigners–they are still critical–it’s just that non-traditional new media communication needs to be planned and used differently. It’s a different strategic process.

Many campaigns get off to a late start. A non-candidate often files to have their name placed on the ballot at the last minute when he or she sees an opportunity. This adds to the urgency of building a volunteer “army” and raising money. Consequently, the goals of all communication efforts are focused on these necessities. When the goals are limited, the action plan is limited. Building, nurturing and engaging a following over time through commonly accepted Web 2.0 “best practices”– target audience research, personal interactions, great content, humor, etc.–becomes difficult at best. There is simply not enough time to do it right, so candidates invariably become broadcasters and salespeople rather than participants and value providers.

New "social" media has been referred to as a giant cocktail party. People will follow you if they think you add value to the conversation and are “real”. Do you want to make friends with the guy at the cocktail party who introduces himself, hands out a business card and immediately asks you to buy his stuff? Of course not. But that’s exactly what political strategists are doing on Twitter and Facebook right now. “Look at my photos…Donate to my campaign…Hold my signs…Make some calls for me…Tell all your friends…Join my followers…It’s all about ME!” This is just as obnoxious as the guy at the party–and exclusively self-centered social media approaches will only alienate prospective voters in the long run.

Even though it’s free to start, effective social media takes time, commitment, strategy, creativity and expertise. Most political strategists are understandably event focused and time constrained. They delegate or subcontract specific duties to volunteers and paid consultants. Budgets and staffs are often limited, but candidates want to get on board with this new marketing phenomenon somehow. Unfortunately, tasking interns to broadcast their every move on Facebook is a poor substitute for a fully integrated social media campaign.

Given “the nature of the beast”, some old media broadcasting will always be necessary. With that said, it’s clearly time for a mind set change. While traditional campaigning still works, new social media efforts, planned and implemented properly, will yield tangible results–money, volunteers, “trust” and votes. So bite the bullet, even if it’s out of your own pocket and the election is right around the corner. Hire Web 2.0 experts. Work with them and try to understand the key strategic differences between old and new marketing. If your message is compelling and you are perceived as a decent human being, the return on investment will be astronomical.
Posted by DemBlog at 11:00 AM

Older Post Home
Subscribe to: Post Comments (Atom)
Ever wondered what all the fuss is about concerning Barack Obama's use of so called "new media" tools during his 2008 presidential campaign? This blog, hopefully, provides some of the answers to your questions.