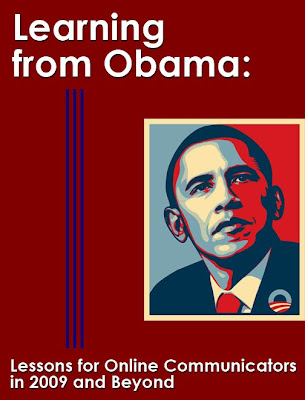 Regardless of any other advantages Barack Obama possessed in the 2008 election season, Obama’s ability to raise as much money as his campaign could reasonably absorb from record numbers of small online supporter donations was decisive in helping to maintain him as a leading first tier of candidate. But, fundraising was only one component of Obama’s carefully nurtured "new media" relationship with his supporters, which ran through many channels and had as a single ultimate goal: electing him President. (click the graphic to read the PDF report)

In early 2007, Rospars, who co-founded his own online consulting firm and worked on Dean’s online-fueled campaign, was brought in to be the campaign’s new media director, and Kevin Malover, a veteran of online travel agency Orbitz, to be chief technology officer. While Rospars was in charge of the entire political operation, Malover helped build software and took care of integrating data and voter files.

Contrast this with the arrangement at many other campaigns and political advocacy groups. The online communications team is call the "tech team," is buried in a basement and is often excluded from the communications planning process until its final stages, leaving the online element an afterthought with a stunted chance at success.

Most campaign organizations and advocacy groups view the online communicators as “the techies,” and expect them to be able to fix a computer or configure a network as well as to run well coordinated multi-channel Internet media campaign from the basement.

Obama’s campaign managers employed a completely different model. They saw that online organizing has become as central to modern political campaigning as direct mail, field organizing, advertising and media relations, and that the the internet can in fact become the backbone of campaign functions from fundraising to turning out voters on election day. Miss that point, and you miss one of the central lessons of 2008.

The Obama organization integrated online communications into its overall structure and processes.

New media team director Joe Rospars was not buried in the technology or communications department. Instead, he reported directly to campaign manager David Plouffe, and he and others on his staff worked alongside liaisons from other campaign areas such as field organizing and fundraising.

Obama’s internet communications strategy aimed at concrete, focused and measurable goals, both online and in the real world.

The campaign hunted supporters through many different online channels and provided them many potential tiers of engagement, with an aim to get as much effort and value out of each volunteer as he or she was willing to give.

The campaign used the internet to put supporters to work substantively both in person and online.

From the beginning, the Obama site gave supporters the knowledge and the means to organize and reach out within their own social circles, and millions ultimately participated in virtual and real-world evangelism on his behalf. Obama partisans badgered, recruited, cajoled and persuaded friends, neighbors, family and complete strangers over the entire course of the 2008 race, and their weapons included parties, events, phone banks, personal phone calls, text messages and door-knocking, plus every online tool available. And, the campaign trusted them to do it.

The campaign carefully targeted much of its online outreach, hoping to maximize the bang-to-buck ratio by delivering the right messages to the right people at the right time.

Their emphasis on targeting is visible in everything from customized email messages to Google keyword advertising to online videos directed at people based on their interests.

The Obama operation treated the supporter relationship as a two-way street, with information and contributions (financial and otherwise) traveling up the chain even as staff instructions and fundraising emails came down.

Besides the high-profile “Yes We Can” and other supporter videos that the communications staff helped spread far and wide, individual volunteer phone-bankers and block-walkers provided data that the campaign used to make strategic decisions about resource allocation up until the last hours of the race. In return, members of the volunteer teams dotting the country were held strictly accountable for their roles and for the goals set for them — the campaign was not afraid to “fire” a volunteer.

Fundamentally, Obama’s campaign looked upon supporters as a resource to be maintained with great care — as a set of relationships to nurture — and saw the internet as the most useful technology to stay in touch with them, keep them motivated and put them to work.

Read the full report on Obama's new media campaign strateg - PDF
Posted by DemBlog at 11:00 AM