More People Rely On The Internet Than Newspapers For News 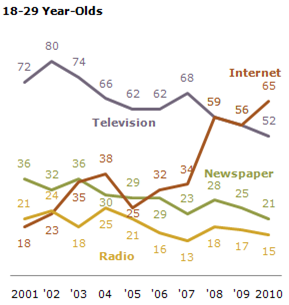 Pew Research Center for the People & the Press report for 2010: In 2010, for the first time, the internet surpassed television as the main source of national and international news for people younger than 30. (chart right)

Over this period, the number of young people citing television as their main news source has dropped from 68% to 52%.

The internet is slowly closing in on television as Americans’ main source of national and international news.

Television remains the most widely used source for national and international news – 66% of Americans say it is their main source of news – but that is down from 74% three years ago and 82% as recently as 2002.

The national survey by the Pew Research Center for the People & the Press, conducted Dec. 1-5, 2010 among 1,500 adults reached on cell phones and landlines, finds that more people continue to cite the internet than newspapers as their main source of news. 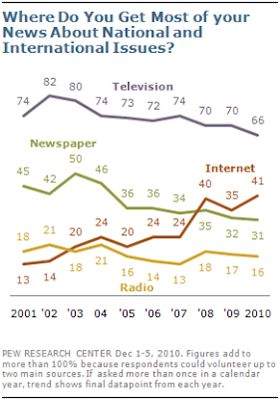 This reflects both the growth of the internet, and the gradual decline in newspaper readership (from 34% in 2007 to 31% now).

Currently, 41% of all adults say they get most of their news about national and international news from the internet, which is little changed over the past two years but up 17 points since 2007.

The Pew Research Center's Internet & American Life Project April 2009 research report titled "The Internet's Role in Campaign 2008," (C-SPAN Video) revealed that some 74% of internet users--representing 55% of the entire adult population--went online in 2008 to get involved in the political process or to get news and information about the election. (graphs)

This marks the first time that a Pew Internet & American Life Project survey has found that more than half of the voting-age population used the internet to get involved in the political process during an election year.

Several online activities rose to prominence in 2008. In particular, Americans were eager to share their views on the race with others and to take part in the online debate on social media sites such as blogs and social networking sites. Among the key findings of our survey: The relative importance of the internet also continued to grow within the overall political media ecosystem.

Among the entire population (internet users and non-users alike) the internet is now equal to newspapers and roughly twice as important as radio as a source of election news and information. Among internet users and young adults, these differences are even more magnified.

Due to demographic differences between the two parties, McCain voters were actually more likely than Obama voters to go online in the first place. However, online Obama supporters were generally more engaged in the online political process than online McCain supporters. Among internet users, Obama voters were more likely to share online political content with others, sign up for updates about the election, donate money to a candidate online, set up political news alerts and sign up online for volunteer activities related to the campaign. Online Obama voters were also out in front when it came to posting their own original political content online--26% of wired Obama voters did this, compared with 15% of online McCain supporters.

Correlated with increasing preference for Internet news sources and online political action is the increasing adoption of broadband internet connection in U.S. homes. Overall broadband penetration across all US homes grew to 63% in March 2009, according to a survey report by Pew Internet (see Figure 1). Dial-up users decreased from 10% to 7% during the same time period. Broadband growth in US homes grew mainly from low-usage groups, including seniors and low-income Americans. Overall, people living in homes with annual household incomes below $30,000 experienced a 34% growth in home broadband adoption from 2008 to 2009.