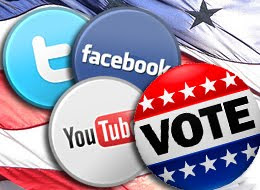 A research study released in
June 2011 by digital agency SocialVibe found that 94% of voting-age social media users are more likely to watch an entire political message viewed online, and then 39% will share it with an average of 130 friends.

The study also found that an investment of $25,000 in a campaign that engages social media users could spread the content online to people of voting age in all 50 states within 24 hours. That’s a lot of bang for the buck.

The SocialVibe study also indicated that political ad campaigns continue to shift more advertising budgets to online and mobile advertising. But it gets a little tricky because the campaigns have the challenge of presenting political messages in such a way that supporters want to share the information.

The key is to facilitate the users or political supporters to share messages or campaigns. Thus, the campaigners will need to become more creative in order to engage and develop loyalty to persuade others such as “friends” to be engaged as well.

All in all, politicians will have a unique challenge of honestly connecting with people one on one as a personal experience. Approach them online in a conversation with a message that is convenient and beneficial for the social media user.

“Most people like to share personal views and beliefs. Allow people to engage with and personalize messages: This is what drives sharing,” concludes Jay Samit, CEO SocialVibe.